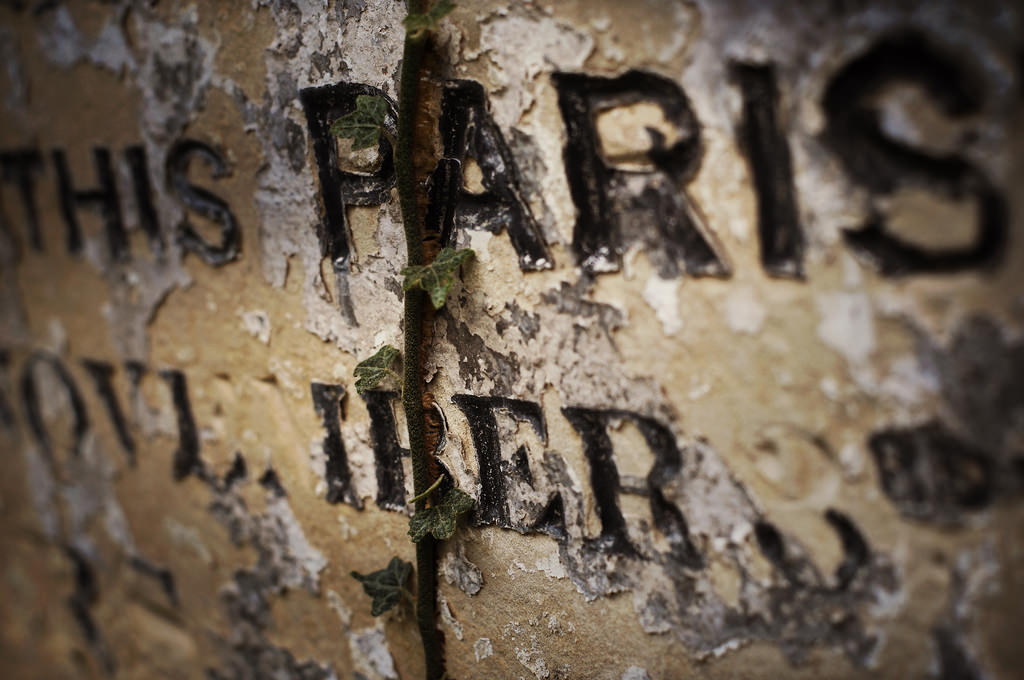 Time for episode four in the ongoing series called These Three Photographs, where I share three photographs of a similar theme, and talk about what they mean to me.

The theme this time is Nature Reclaims.

No shock to anyone familiar with my work that this is a(nother) gravestone photograph.

And in many ways it represents all gravestone pictures I’ve taken in recent years.

What I like about this one is the double edged attack of nature.

The rain, snow, sleet, wind, frost and sun have gradually, in collusion over decades, been peeling away the surface texture of the stone and the painted letters.

Furthermore, strands of ivy are sprawling up too, as if trying to pull the stone back down into to earth below.

As well as this reassurance that nature will reclaim all things (including the body beneath, which judging by the decay of the gravestone would have occurred many years ago), is the almost nostalgic and timeless feelings the materials bring.

This image could have been made 10, 20 or 50 years ago and probably wouldn’t have looked a lot different. The absence of anything dating to these modern times with us all saturated in plastic is comforting, at least to this photographer. 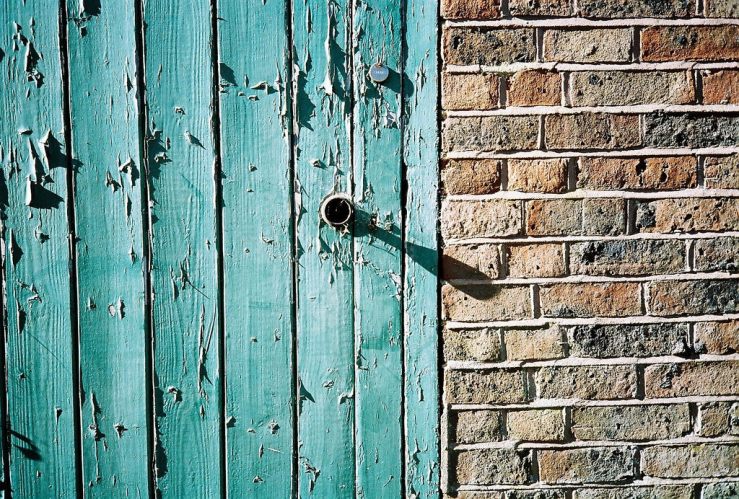 Again on an aesthetic level, the appeal is the delicious textures and contrasts on a single surface, compared with when it was new.

In fact the door is so weathered, its individual wooden panels are beginning to bow, as well as the paintwork gradually peeling.

Again, a reminder to me that whatever man may construct, nature will seek to take it back.

I also like in this shot that part of the door handle is missing. The first step in making the door unusable and nothing more than a wooden panel punctuating bricks in a wall. 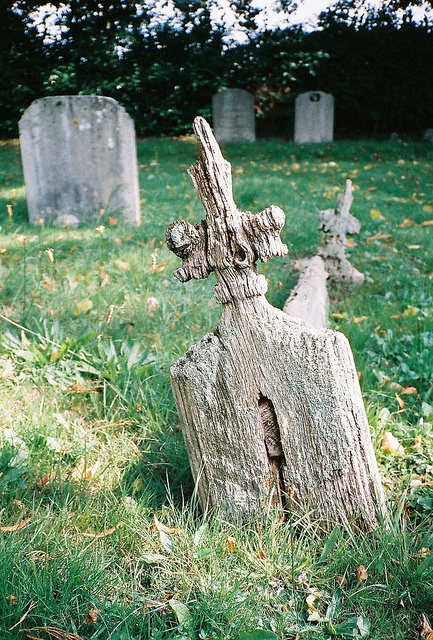 Ah, back to the churchyard. This photograph was taken in one of those I’ve frequented most.

Indeed the village, Highbrook, is where we chose to have our wedding reception in 2015. It is to me one of the most idyllic and rural places to walk and to be in Sussex.

Anyway, this unusual wooden gravestone has been thoroughly ravaged by the elements over time and has gorgeous inviting textures to photograph.

For this shot I wanted to capture the whole object also, to show how distorted it had become – originally both ends would have stood proudly and perfectly vertical.

Although not particularly close up, like many of my texture shots, the camera and film did well enough to portray the grooves in the wood and the lichen amassing. Again that twin pronged natural attack of plants and the elements.

When I returned maybe a year after this was taken, the gravestone was missing.

A few trips after that, where I ventured inside the church, there it was. It had been removed to prevent any further decay, as apparently it’s a very rare example of such a wooden gravestone, according to the text now displayed beside it.

What drew me to photograph it originally was that again it’s a wonderful example of how nature seeks to reclaim all things back to the earth.

Another decade or two outside, and this once sturdy and new marker would have been nothing but fragments of wood scattered amongst the grass, sweet sustenance for untold insects.

Do you enjoy photograph decaying stone, crumbling wood and flaking paintwork? What are your thoughts on nature reclaiming materials to the earth?