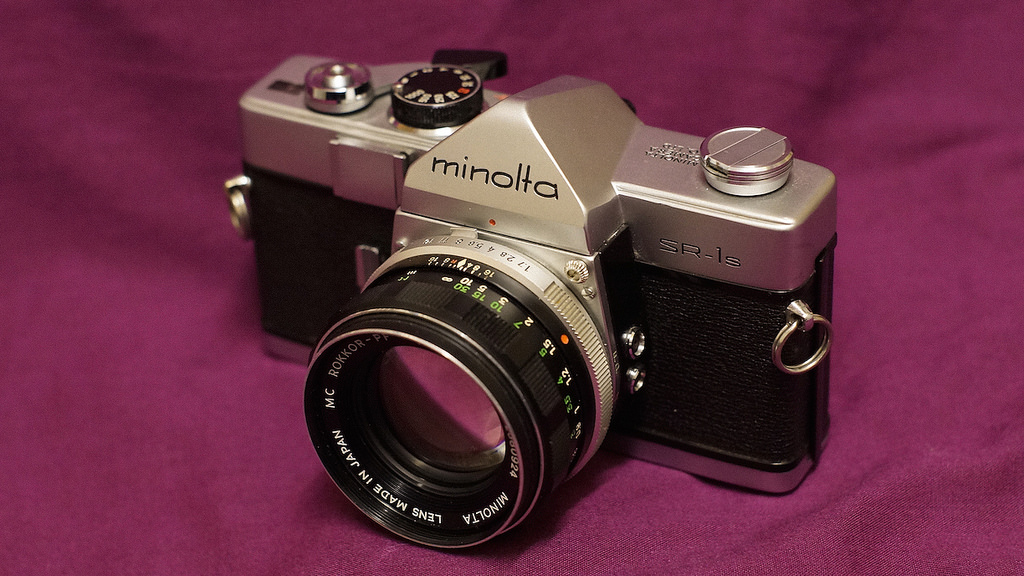 When I first held my first Minolta – an SR-1s with MC Rokkor-PF 55mm f/1.7 lens – it was as beautiful as any camera I’ve held before or since.

In use too, both lens and camera felt well built, smooth and oozing class.

Its simplicity was as alluring as its handsomeness – no meter, just the pure essentials need to make the photographic experience enjoyable and beautiful from start to finish.

So, as a result, this camera surely remains at the heart of my collection, correct? Er, no.

After the SR-1s whet my appetite for Minolta, I explored a handful of other lenses. The pinnacle of these was quite probably the big brother of the lens on the SR-1s, a Minolta MC Rokkor-PF 58mm f/1.4.

This gem remains the most gorgeous lens I have ever owned, and quite likely the most beautiful object I’ve ever owned.

Other thoroughly excellent lenses I tried were the very capable and silky smooth MD Rokkor 50/1.4…

And the highly impressive MD Zoom 35-70mm f/3.5 Macro, which single handedly made me look at zoom lenses in a whole new light, and led to me using my best zooms as a replacement for a prime.

As well as a humble later era MD 50/1.7 that despite its diminutive size, weight and plastic feel, optically held its own against any other Minolta SR mount lens I’ve owned.

So again, surely I’ve kept all these gems too? Er, no. Again.

Whilst with Minolta I was indeed halfway to heaven, and thought – and still think – many of their lenses are fantastic (and indeed now have a couple of arguably even better vintage Minolta AF lenses for my Sony a100 DSLR), the bodies just didn’t match up.

Yes, the SR-1s was a lovely camera, and for fully manual and meterless film photography it’s as good as anything I’ve used.

But, for 9 out of rolls of film I shoot with an SLR, if not more, I like to use Aperture Priority mode. So I sought out a Minolta body to accommodate this, and settled on the X-700.

The X-700 had the best viewfinder I’ve seen on an SLR, and was breathtaking to look through.

But otherwise,  whilst competent enough, it somehow always felt faceless and unremarkable.

It took the over complicated and over featured (in my view) X-700, stripped away everything you don’t really need but kept the compact size, big bright viewfinder and of course fantastic range of lenses. It yielded some very pleasing images.

The answer is, which one? The first one that lasted a roll and half then seized? Or the second one that was dead on arrival (despite being sold as fully working)? Or that one’s replacement, which lasted a glorious seven shots before also seizing?

My confidence in the reliability of Minolta electronics, and the lack of personality of their bodies anyway made me wonder if I’d ever get to use my beautiful Rokkors on film again.

In the meantime, the discovery of the divine Contax 139 Quartz which is a whole other world of class to the Minolta equivalents I tried, was the final aperture pin in the coffin.

So I sold my last remaining working Minolta body – that original SR-1s – as it was gathering dust, knowing if I wanted an old school all mechanical experience I had my Asahi Spotmatic F and a wonderful Super-Takumar 55/1.8, amongst other fine M42 lenses.

Ultimately, my Contax story has proved to be almost the opposite of the Minolta one – amazing bodies, the best I’ve used, but somehow disappointing lenses, not so much in the final image, but mostly in feel and pleasure to use.

The epilogue to this tale is that I’ve returned to the best combination of film bodies and lenses I’ve tried – Pentax.

Whether the M42s, like the aforementioned Spotmatic F with a fabulous Takumar 55mm, or K mount, like the later M or A series (my current K body is a Program A) with the excellent, light, smooth and very well built Pentax-M lenses.

The moral of the story?

For me, with my love of the tactile experience of vintage kit, having just one piece of the puzzle – body or lens – was not enough.

A ten out of ten lens with a six out of ten body, or vice versa, is just frustrating, and gets in the way of fully enjoying either.

Whereas eight or nine out of ten for each is a far better balance and experience overall.

Which is your favourite system? Is it because of the lenses, the bodies, or, like Pentax for me, the most satisfying unison of both?