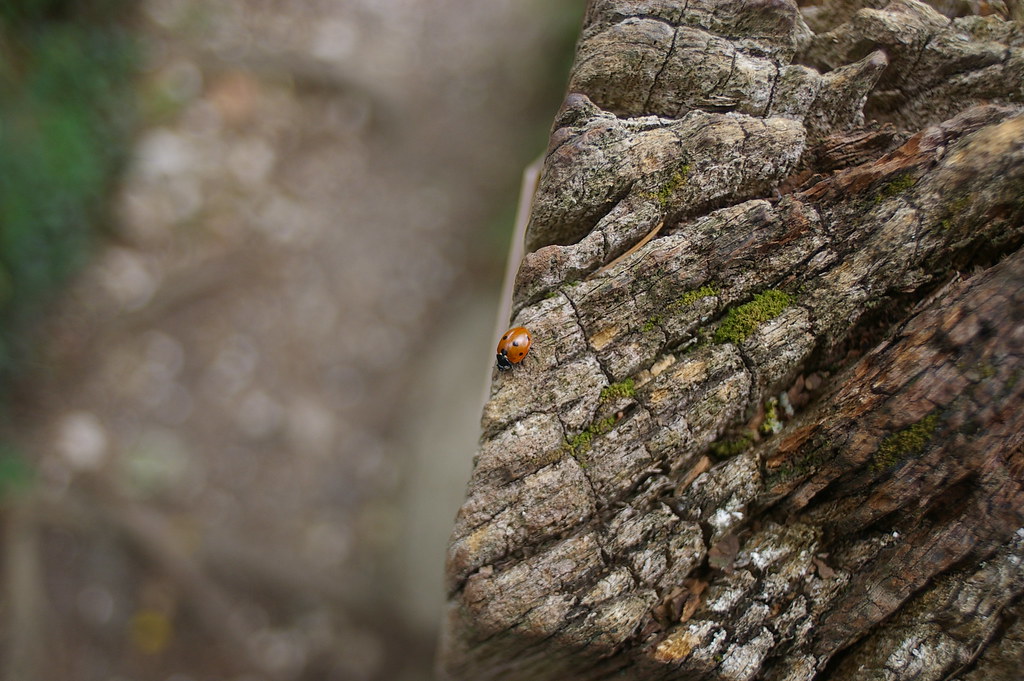 A few weeks back I added to my Pentax K mount CCD DSLRs with a Samsung GX-1S, picked up on that website which shall not be named, for £35.

I wanted the camera mainly, but of some interest also was the lens attached to it, a Hoya HMC Wide-Auto 24mm f/2.8.

When the package arrived though, a quick test revealed the camera to be in working order, but I couldn’t get the aperture blades to move on the lens. Also, the rear element appeared to be loose.

A shame, since the lens was otherwise in very good condition, with a pleasing metal build, smooth focusing and aperture rings, compact size and minimum focus of just beyond 0.27m. 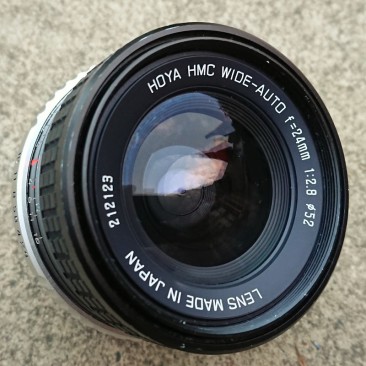 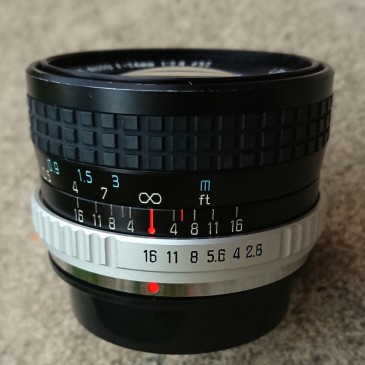 I contacted the seller, who promptly did the decent thing and gave me a partial refund of £10.

Considering the Samsung body a bargain at £25, and the lens a freebie, I thought I might attempt to remove a few screws and see if I could get to the stuck aperture blades.

Now, in the past I’ve attempted to fix a few lenses, most often the wonderful when working but usually broken Pentacon 50/1.8s in M42 mount.

I never had much luck, and wrote a few off, unable to put them back together, though their pocket money price, stiff focus and stuck aperture blades meant I didn’t lose any sleep over the loss.

I think I may have attempted to overhaul a Helios 44 at one point too, again because the focus ring was too stiff to use. Again I failed!

So I didn’t have high hopes for the Hoya, and was prepared for it to end up in the bin, a mass of springs and screws, irrevocably parted.

First I removed the loose rear element – it just unscrewed with my fingers – followed by a couple of washers. This gave me much better access to the lens’s innards and I could now see the blades, wide open.

Moving the aperture ring through its range to and fro I could see the mechanism working, but not the blades.

So I gently dabbed a cotton bud soaked in lighter fluid around the aperture blades, and gave it a chance to soak in a little.

I managed to remove the aperture ring, and not for the first time in my life heard that sound of a tiny metal ball invisible to the naked eye of anyone over 16, rolling away never to be seen again.

I’m explaining this part away as my entirely intentional act of making the lens a clickless aperture, like a preset lens.

I then found the lever that moves the aperture blades open and shut, deeper in the bowels of the lens, and eased it tentatively with a screwdriver.

It moved, but the blades didn’t.

So I was ready to right the Hoya off as usable only at maximum aperture (which it performs surprisingly well at), and put it down to make a drink. 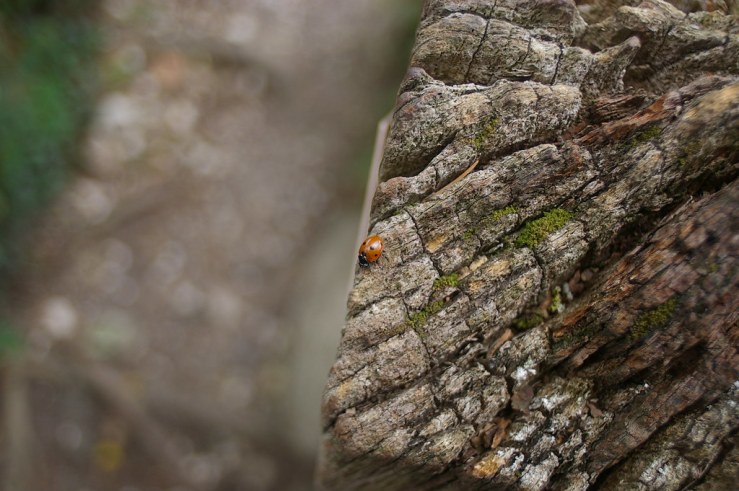 When I came back and gave that golden lever another poke with the screwdriver, suddenly the aperture blades closed down, like nothing had ever been amiss.

After a few further actuations, I managed to reassemble the lens (minus the microscopic ball bearing probably now claimed by an ant as an exotic metal marble to show off to his family) and mounted it on the Samsung.

And since then, it seems to have worked just fine.

Using the auto pin, the blades are slightly sluggish to close, but since I’ve discovered I can use semi auto aperture lenses from this era (like all the Pentax-M lenses) on Av mode by fractionally unmounting the lens until the blades close so they then work like a fully manual aperture lens (more on this revelation in an upcoming post), this is a non-issue.

So I feel a minor victory here, not only by being able to fix a lens that had very limited use and seemed (and was!) faulty when I bought it, but also because it gives me a glimmer more confidence should I come across a lens with a similar fault in the future (knowingly or otherwise).

eBay is littered with lenses with stuck open aperture blades, so it could open up a kind of cheap lens side project.

Or I might just focus on using and enjoying what I have, including this resurrected Hoya 24/2.8!

How about you? Do you ever repair lenses?

Do you specifically seek them out to fix, as a way of making lenses more affordable (or just for fun!)? Or do you, like I did, avoid anything in remote need of maintenance, and leave it to the professionals?

12 thoughts on “The Only Lens I’ve Ever Fixed”