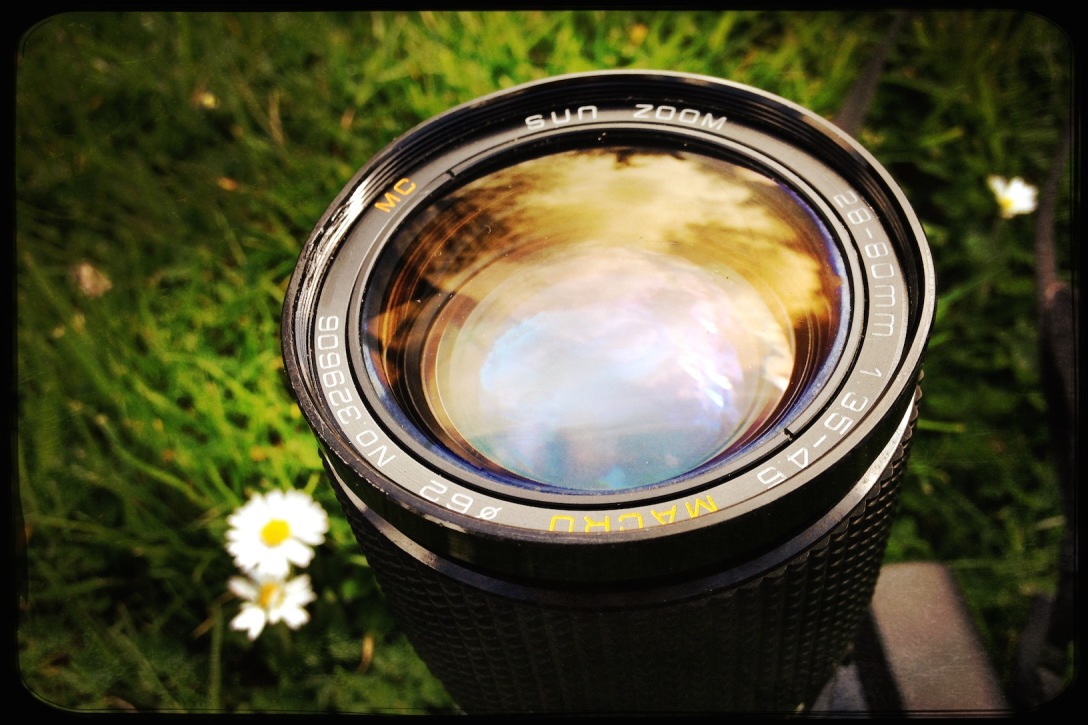 In my vintage lens adventures, I’ve rarely come across any that were truly awful. Indeed many have initially been underdogs on paper, but have then surprised me in use.

So I decided to set myself a challenge that encompassed the two aspects of my 35hunter approach – finding a lens that met certain criteria, then finding some tiny pockets of beauty to photograph with it.

Being something of a cheapskate, I decided to set my spending limit to just £5. Could I find a usable lens for £5 or less, and get some decent results with it?

After a little research on eBay, and dismissing a few based on either their brand name (Optomax, Makinon, Prinzflex), focal length or incompatible mount, I found a promising looking Sun Zoom in Pentax K Mount. It was listed as faulty, due to a dented filter ring, for just £4.99 + postage.

Though I no longer have any Pentax film bodies (aside from my M42 Spotmatic F), I still have the PK > NEX adapter for my Sony NEX I bought a few years back. So I clicked Buy It Now.

Overall it’s quite compact for the range it covers. The focal length adjustment slides, the focus ring rotates. One thing I like about zooms like this is how wide the focus grip is.

The throw of the focus is amazingly short, less than quarter of a turn to go from 2m to infinity.

Which brings us to the first potential problem.

Fortunately, it has a second ring labelled MACRO, and after pressing a small button to enable it, this adds much closer focus.

The way I use zooms is a little untraditional (essentially as a set of primes within one lens, using only one at a time), so the sliding focal length barrel is slightly odd, but actually works well for me. Once I set it to the focal length I want, I don’t need to touch it – only rotate the barrel to focus.

So I set my NEX to its usual neutral settings, shooting RAW at ISO400 (I like the added grain/noise compared with ISO200), and set off.

Because I shoot pretty close most of the time, I set the focal length to 80mm, enabled the macro ring to its shortest distance, and set about shooting.

Struggling with the decided non-macro-ness of 0.8m, I decided to instead switch extremes to 28mm, and get much closer.

So how did the photographs come out?

Yellows can be difficult, especially in bright sunlight, and sometimes blow out so you lose detail. No such issues here for the Sun it seems, and the richness of the dandelions is pretty impressive.

Plenty sharp enough for my needs for the main subject, and even a hint of some swirly bokeh, thought the contrast is maybe a bit lacking. Very happy with this one overall though.

Again the sharpness seems more than acceptable, decent contrast and colours too. Whilst the bokeh couldn’t be described as buttery smooth on the fence, the highlights above are really quite pretty and not harshly angular and distracting like some far more renowned lenses I’ve used can create.

The Sun Zoom has already performed much better than I expected a £4.99 28-80mm zoom lens to.

[Edit: Another factor I thought of some hours later was of course I’m using a lens designed for 35mm film cameras on a digital APS-C sensor.

So the 28-80mm of the lens equates to a field of view of 42-120mm with the 1.5X crop factor of the sensor. Which also means the sensor only records the central part of the lens, and crops out any potential edge and corner imperfections.

The lens might be terribly soft at the edges on film!

This is another reason I enjoy using old film lenses on a digital APS-C camera (Sony NEX and a100) – they naturally optimise the best performing area of the glass, without the need to consider and/or manual crop any edge defects afterwards.]

I think another factor might be the kind of reverse psychology of using cheap lenses.

If I have a lens that cost me next to nothing (seriously, what else does £5 buy these days?), I’m kind of freed of any expectation. Plus I also like the challenge of trying to make something beautiful with such humble tools, in a way it makes me try harder and focus more.

These two elements aren’t really measurable or tangible, but I am aware of them, and can’t deny they have in some way contributed to the respectable results I’ve seen so far from the Sun Zoom.

I plan to give my new frugal friend another run or two in the near future and will update with another post.

What have been your most pleasing results with very cheap cameras and/or lenses? How do you feel using cheap kit compared with far more expensive?