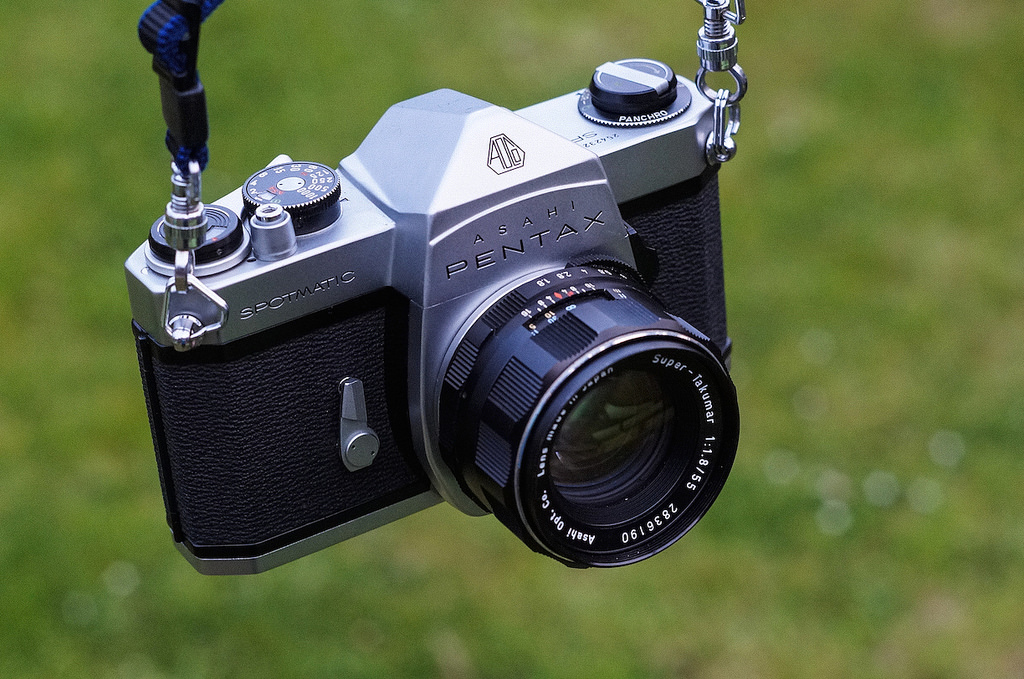 Unlike some photographers who picked up a camera whilst still in nappies, I was more of a late bloomer.

I didn’t start shooting intentionally until around 2006 (aged 30ish), with a series of camera phones that led to a “proper” digital compact in 2011, followed by the explosion in summer 2012 that trumpeted my discovery of film photography.

Fast forward to a very recent conversation that got me thinking about the huge range of vintage cameras available to us today, and how, rather than enable us to photograph to our heart’s content, it’s instead crippled us with too much choice.

So I wondered how my photographic life might look rewound a generation.

Let’s assume for this little flight of fancy that I started photographing with intention 25 years previously, in 1981.

This was one of the most exciting times in photography. A few years after small SLRs like the Olympus OM and Pentax ME broke through, angular shiny black plastic with red trim was replacing gracefully brassing metal, intelligent electronics were becoming more and more prevalent, and the evolution of AutoFocus was gathering momentum.

Plus I’d need a reasonable amount of cash to fund my blossoming Bowie and Bush vinyl collection as well as a stereo with record player and twin tape decks to make copies of the albums for my Walkman, so I was wired for sound like one of my mum’s heroes. Or one of her slightly more cool other heroes.

With this twin criteria of low complexity and low cost, the latest SLR of the day wouldn’t have been a contender.

So maybe I’d have started with a couple of year old compact like one of the Konica or Minolta early AF efforts.

Maybe even an Olympus XA, but I would have thought I’d have been priced out of that option around this time.

Maybe I’d have gone with something a little older like a manual focus rangefinder, like a Minolta Hi-Matic or Konica C35 or an older Canonet, or something more exotic.

Most probably I would have soon found my way to Pentax one way or another.

Perhaps after getting comfortable with my first semi automated cameras I’d have dipped my toes in the SLR world with a Pentax ME or ME Super and a 50/1.7 M lens.

I suspect this, in time would have made me curious about older Pentax models, like the Spotmatics and the amazing Takumar lenses.

But then how would I have found out about these other cameras, with no internet, no blogs, no Flickr, no Camera Wiki, no PentaxForums, no eBay?

I think if I’d have enjoyed my first photography experiments enough I would have sought out a group or club of some kind, probably via speaking to someone in one of the places I got my film developed. Back then of course there would have been multiple options on every high street!

Of course there have always been photography books – not just of the photographs of great photographers, but of particular models, the history of brands and genres of photography, and so on. Plenty of learning to absorb.

An evening class or workshop is another option I’d have probably explored to get to know the basics better.

From my reading, and the contacts I made at any clubs or classes – and the cameras I saw others using – I’d gain an idea of what I might like next.

What I think would have been very different is the channels through which I bought, and the cost of the cameras.

In recent years I’ve picked up dozens of lovely lenses for less than £20 and plenty for less than £5. A generation previously there would have been fewer around, though you could argue more from the 70s were still in circulation and hadn’t broken or become fungus infested.

I don’t expect you could have picked up something like a Takumar 55/1.8 for the equivalent of £20, maybe three or four times that. So my casual – and at times bordering on uncontrollable – spending of recent years would not have been possible. I just couldn’t have afforded it.

I think this would have hugely positive and meant that I would only have one, possibly two cameras, maybe one compact, one SLR or rangefinder.

Which would mean I would get to know them in far more depth than the majority of cameras I’ve had in current times. I’d guess that of maybe 150 film cameras I’ve had, I’ve put more than six rolls through perhaps only a dozen of them.

Another aspect that would have been very different is processing.

Aside from the complete absence of digital – including digital scans of negatives – I would have always got prints back from the developer.

I think this would have changed my perception of the value of a great photograph, having it physically there in my hand. And inevitably those I was most proud of I would have made enlargements of and hung on walls.

Initially with this train of thought I wondered if I would have shot very selectively, given that every photograph would cost me money.

But then I remembered trips with my nan in the 80s to high street camera stores, and the wide range of options. My nan wasn’t well off by any means but had film developed quite often, and I always remember her getting a free film every time she took the previous one in to be developed.

So maybe processing film in 1981 was much more affordable than I think?

Overall, born a generation earlier, I think I would have missed out on the connections and information and opportunities for acquiring new (old) cameras cheaply that I have known.

But maybe all of these limitations would have been good for me, and I’d have been able to focus more on trying to master one camera, one lens, one type of film.

As well as enjoying the physical print in a way I’ve barely explored at all in my current photography.

This has been an interesting imaginary trip through time, and certainly given me food for thought on how I currently shoot.

How would your photography have looked if you’d been born a generation older?

I’d love to hear in the comments below (and remember to tick the “Notify me of new comments via email” box to follow the conversation).

44 thoughts on “How Would Your Photography Have Looked Born A Generation Older?”