When I shot predominantly film, I used to have it developed and scanned at a lab, then used the images straight from the CD.

Yes, of course there was some digital processing involved by the software and the person developing, but in terms of my input, it ended when I pressed the shutter button.

It felt a rather pure form of irreversible photography.

With digital photos though, whilst I try to do as close to zero processing as possible, I still see the images as fair game for any kind of digital manipulation.

Unlike film, they were never a physical medium brought to life by a chemical reaction, but ones and zeros right from the moment the shutter was released.

Lately I’ve been using Snapseed to process images on my phone and have a couple of saved “Styles” for b/w photos and another couple for colour.

Occasionally I might play around with some “vintage” options to see what I can make too – the digital equivalent of the sort of lo-fi photography I used to enjoy with cameras like the Superheadz Black Slim Devil.

To digress a little (it will come back around, trust me) I’ve been getting back into the music of avant-garde composer William Basinski.

I don’t know all of his music, but some that I have listened to and greatly enjoyed was made by making decaying tapes of old music he’d recorded into short loops, playing them, then recording them, as the sounds (and tapes) gradually disintegrated into virtually nothing.

Some of his best known work of this form is called, naturally enough, The Disintegration Loops.

Aside from the actually sound of these recordings, I love how they were unique, because the tapes were literally wearing out and falling apart. Each repetition was fractionally and almost indiscernibly more broken and altered than the previous one.

Now this is not the first time music has strongly influenced my photography.

Basinski’s intriguing and ever decaying music, combined with the aforementioned experiments in Snapseed, got me wondering about how I might experiment with a visual version of works like The Disintegration Loops.

So I took an image, shot recently in b/w on my Ricoh GX100, and applied the usual Snapseed process. 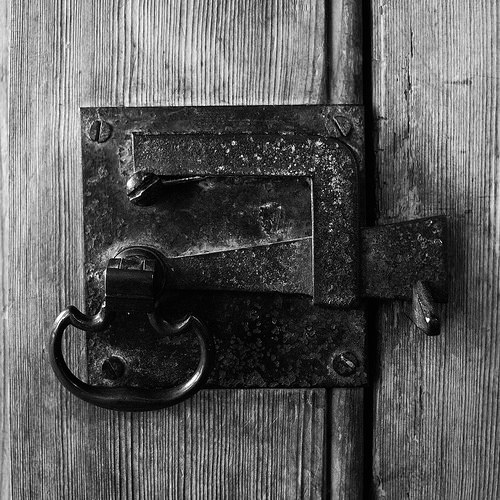 As the initial photograph hadn’t turned out as well as I’d hoped, I thought of it as a likely candidate for this experiment.

First I applied a light leak preset I’d made in Snapseed. 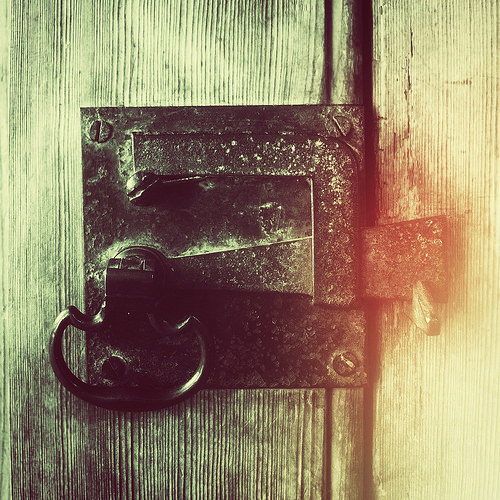 I actually really like this photo, how the preset has given colour back to a b/w photograph, and the light leak, though simulated, reminds me of many light leak experiments (some unexpected!) I explored with film.

But getting just to this image wasn’t the point. I wanted multiple iterations. So I applied the b/w preset again.

Again I like the result, more than the original b/w. This reminds me of the high contrast mono mode I have on my Ricoh GRD III and Pentax Q cameras, and occasionally use when I want a more graphic, inky and sketchy look than “standard” b/w.

I repeated the same process over and over, alternating between the vintage and b/w presets in Snapseed.

Like Basinski’s constantly deteriorating tape loops, the image had gradually dissolved from being a recognisable object – a door handle – into simple, almost graphite like shapes.

Indeed to me it looks like an album cover to some classical minimalist record.

I’m tempted to have a print made of the final image above, just to see how it looks on paper.

So what did I gain from this experiment?

Well, it was enjoyable seeing an image evolve and disappear.

A reminder that ultimately all images are made up of curves and lines, light and dark.

Plus further evidence, as if I needed it, of the frighteningly unlimited potential of digitally processing, and how any initial image can be made to look like anything else, if you spend enough time processing it.

Also, it showed me again that by picking and limiting one variable, and applying that over and over, you can reach an unexpected and interesting outcome. You don’t need to choose and vary a thousand options each time to be “creative”.

The final, and most important, take away for me is I’m glad to have found the relatively simple workflow I have.

Taking pictures with a small handful of cameras I now know so well, applying a preset look I like, and being finished, left with nothing more to do than appreciate the best photographs I can make.

The fewer options you have – and the less to get distracted by – the more you can focus on the most important elements.

Something I’ve found true in all aspects all life.

In photography, those essential elements pretty much come down to composition, focus, light and shadow.

What kind of processing experiments have you tried? What did you learn or gain from them?