For the majority of photowalks over the last couple of years I’ve shot mostly in black and white.

Partly this is because I’ve just enjoyed it more and been more in that kind of mood, partly because I find it easier (fewer variables means fewer decisions to make!) and partly because I haven’t until very recently found a camera that delivers colour images I like straight out of camera.

I was recently asked about why I shoot b/w or colour, and whether I could compare the same shot in both forms to show and explain why I made the choice I did.

So here are two from a recent photo walk with the Golden IXUS.

By way of introduction, I usually set a camera to a b/w mode so I can see on screen what the final image is likely to look like.

But with the IXUS 870, by accident I found that by using the Custom Colour mode where you can up the contrast and saturation a little, then converting to my usual b/w set up with Snapseed afterwards, I was getting more pleasing images than using the camera’s b/w mode, which is too grey, too washed out for my liking.

And whilst I prefer having the b/w shown on screen, by now I feel I’m experienced enough to be able to visualise what will look better in b/w without it.

So for this photowalk, I was aware of which images would be converted to b/w when I was shooting them, but shot them in colour with the plan to convert to b/w via Snapseed. 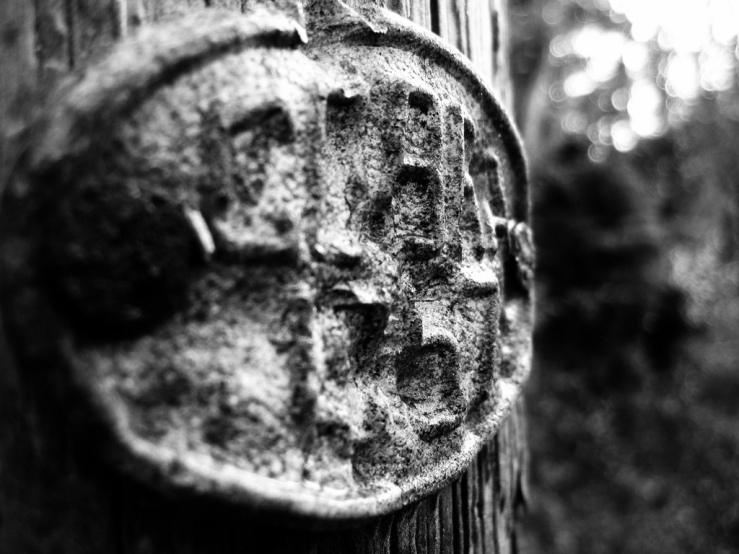 The main appeal here for me was the battered old badge nailed on to the telegraph pole, from what looks like 1957. These are common on these poles round here, and this is one of the older ones I’ve seen.

I also wanted a hint of the weathered textures of the wooden pole itself, and as I’ve learned that the Golden IXUS favours using as large an aperture and low an ISO as possible, I knew it would force a very shallow depth of field (because it shot wide open at f/2.8), and the in focus part would be pretty sharp (it used ISO100, just above the camera’s native ISO80).

So I knew the out of focus area in the background would look better to me in b/w too.

Here’s the original in colour.

Of course the depth of field, focus and so on are exactly the same, you can’t change those after the photo’s been made.

But I knew because of the colours in reality, it would end up too washed out looking for my tastes, the background especially would be pretty bland, and that as a colour image the contrast and textures I wanted to highlight wouldn’t be anything like as pronounced.

So it was always going to be a b/w photograph.

Again, the main emphasis for me here is texture.

I was amazed to find this repaired gravestone as so many of the ancient rural churches I visit have graveyards littered with broken and neglected headstones.

The fact that it was originally placed in 1818 (assuming this was soon after Thomas Oppard passed away) makes its history more enigmatic. The repairs are obviously not very recent as they are significantly weathered too, but whether this was done in 1820 or 1980, who knows.

Gravestones often have delicious textures. This particular one upped the appeal twice over with the cracks and repairs adding interest, plus the ivy trying to make its impression too.

Sometimes if a similar scene has coloured ivy leaves (either green living ones or dying brown ones) and it’s a sunny day, I might take a colour shot.

But here as there was virtually no colour in the scene, and no sunlight directly on the stone, b/w was again an obvious choice.

Also, I decided to shoot close enough so the whole composition was filled by the stone, and became more like an abstract painting with shapes and sections, rather than a picture of an object in its natural setting. Again I think the b/w enhances this.

Here’s the original in colour.

As you can see, whilst the subject is obviously the same, and has the same potential stories, it’s pretty bland as a colour shot, and the b/w choices enhance the drama and textures.

I hope this post gives an insight into my choices for b/w photography, and what I look for.

Typically, it is texture, light and shadow, shape and form.

I also tend to look for more dramatic compositions that suit the kind of b/w look I favour, ie higher in contrast, with deep blacks, rather than a sea of grey midtones (which is what the Golden IXUS (and indeed most digital cameras) tends to output with its b/w mode straight out of camera, again hence why I use the Custom Colour mode with extra control over the contrast and saturation, then Snapseed after).

How about you? What dictates if/when you shoot colour or b/w? Do you decide before you leave the house, immediately before you take the shot, or do you use colour and then try a b/w conversion afterwards to see how it compares?

Please let us know in the comments below, we’d love to hear about your experiences and decisions (and don’t forget to tick the “Notify me of new comments via email” box to follow the conversation).