A year ago I used LightRoom to process RAW photographs captured with my Pentax K10D DSLR. This evolved.

Six months ago my preferred workflow was using my iPad or iPhone and Hipstamatic to process JPEG photographs made with my digital compacts.

Now, the act has evolved further still, and I use my Sony Xperia Android phone with Snapseed to process the JPEGs from the digital compacts.

Currently one camera makes photographs with no need for post processing. The wonderful Pentax Q with its internal options for bold monochrome shots, has enough creative control that I’ve been able to set it up to create the final image in camera.

In some ways this was the zero processing holy grail for me.

But my Xperia/Snapseed set up is now so fluid it takes merely 13 seconds on average (yes, I’m geeky enough to have timed myself for multiple photographs and taken an average) to get the black and white (b/w) look I like. So I don’t mind going through this process for the images from the other few compacts, for the improvement I think it makes.

Here’s what I do. Firstly, in camera.

Depending on the camera, I set it up to make b/w photographs. The Ricoh GX100 has this option, but no further options like contrast etc.

My Ricoh GRD III does have contrast options so I add a little contrast to the standard set b/w set up. The Sony L1 and Olympus C4040 which I’ve bought recently, both have a b/w mode, and contrast settings, so I bump up the contrast in those too.

Typically for all of these cameras, I use exposure compensation to take the edge off.

With digital compacts and their smaller (than DSLRs and mirrorless) sensors, you notice certain characteristics.

One is a far deeper depth of field, another is they tend to blow out highlights more easily.

Whereas with film I used to over expose virtually all of the time as all of the film I used had a latitude of -1/+3, ie you can expose it between one stop under or three stops over and still get great results.

With digital it’s the opposite, I tend to expose for the brightest parts of the scene.

This works on two levels – first I don’t get many problems with blown out highlights, and second when you have higher contrast scenes, by exposing for the bright parts it makes the dark parts really dark.

I dislike b/w photos that are merely shades of grey, and like my blacks to be deep, dark, inky pools you can dive into. You’ll rarely hear me talking about recovering detail from shadows!

Once the images are made in camera, I upload them to my MacBook, either plugging the camera in directly or via a USB card reader.

Either way, Image Capture shows the thumbnails and I Import all photos from the latest photowalk with one click. 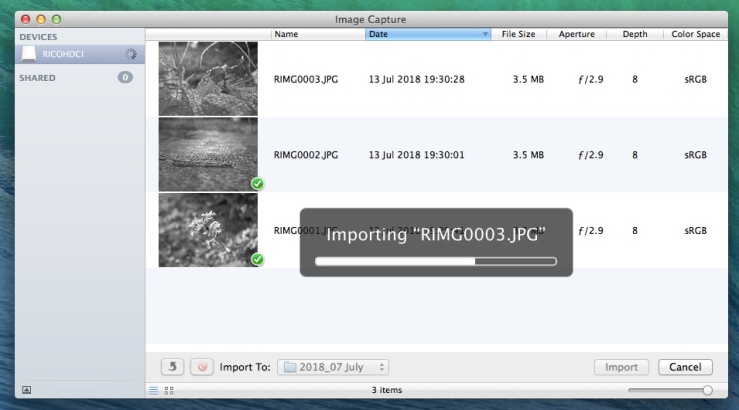 These days my filing is far simpler than when I had dozens of film cameras and started a new folder for every roll of film, labelled with the camera, lens and film. Now I just have a folder for each month and all photos made across all cameras go in together. After that point I’m not really interested which camera made which images.

My MacBook is synced with Google Photos (GP), so as soon as they start importing from the memory card, the start uploading to GP too.

Once done, I double check the files are on my MacBook, and in GP, and delete all images on the memory card so it’s ready for next time.

Although I have a few 16GB SD cards, I also use 1GB and 2GB cards that never fill up on one photowalk. It’s all I need.

After ejecting the memory card/ camera, it’s off to Google Photos.

Usually I’ll sweep through first on my MacBook or ChromeBook (both have 15″ screens) and delete those that don’t make the grade.

Those I do like, I then edit using my phone. It’s just easier, quicker and more portable. I have Snapseed on my iPad, but just don’t bother as it’s involving another device unnecessarily.

For this demo, I’ve used the Ricoh GX100 to take a few snaps in the front garden.

This is how one looks straight from the camera. 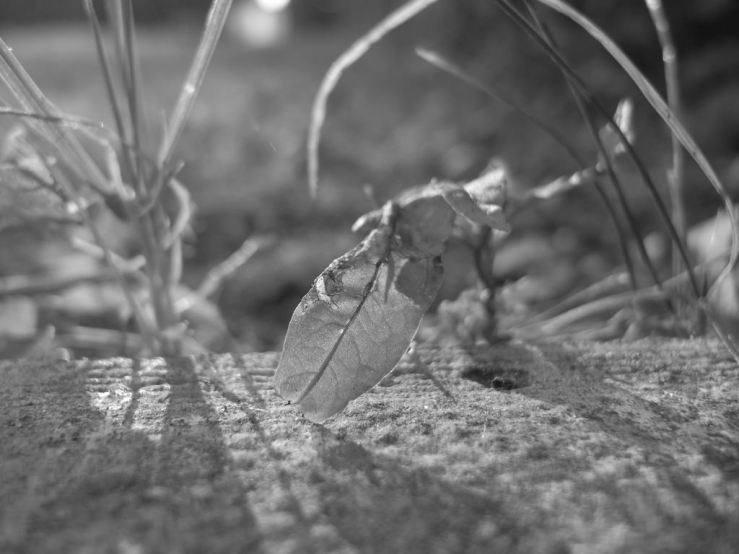 For me, far too many of those shades of grey I mentioned, and nothing is really black at all, even in the top corners of the composition.

Now on my Xperia phone, from GP, I go to menu (the three dots) > Edit In > Snapseed.

The “Styles” appear at the side of the image, both those that come with Snapseed and my own I’ve set up. 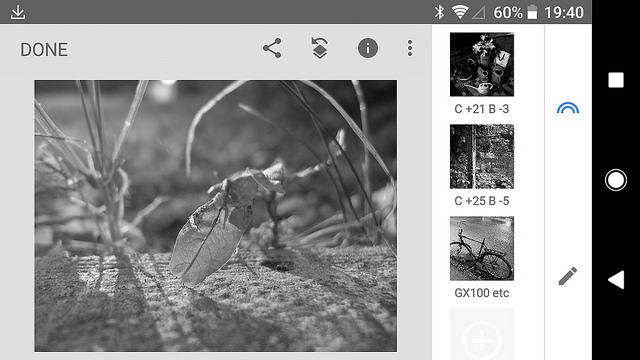 I tap on the “GX100 etc” high contrast b/w Style and it applies it instantly. If I want to see how it compares to the original, I just hold my finger on/off the image and it toggles between the before and after. 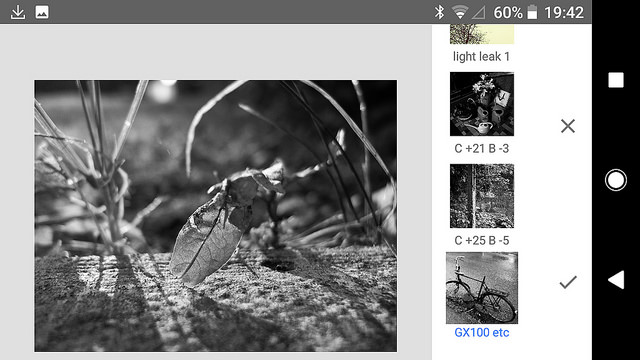 Then I tap the tick, then Done to save the processed image.

The phone exits Snapseed and reverts to the original image in GP, which I usually then delete, once it’s confirmed the Snapseed version is saved. 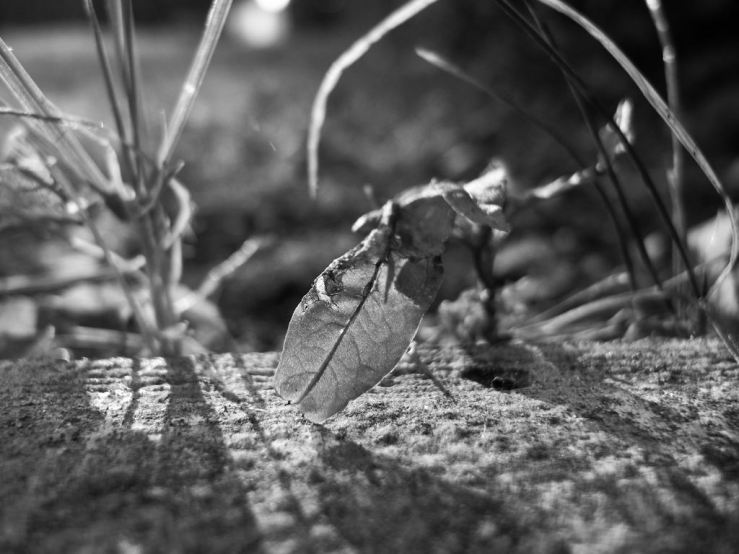 As you can see, these tweaks, though quick and logical, for me make a significant difference to the final image.

I usually do this processing for most or all of a photowalk in a batch, then at a later date go through again on GP and delete any that aren’t good enough.

Those I do like, I download to my MacBook and upload in Flickr, so I have a version on the MacBook, GP, Flickr, and after a few weeks, another back up on an external HD when I do my routine TimeMachine back up of everything on my MacBook. Probably too much, but I haven’t quite worked out how to streamline at this point.

So this is how I use a preset Style I’ve already saved in Snapseed, but how did I set these up in the first place?

Again, you know me, it was simple!

I really do like Hipstamatic, it’s a fun and tactile interface on iPhone and even better on iPad. But the glaring omission for me is I never really knew what I was doing to get the photos how I wanted them.

Hipstamatic is based around applying one or more of three main variables – film, lens and flash. I came to learn that using a certain film with a certain lens and a certain flash gave me a result I liked. But I didn’t know why, or what those film/lens/flash presets were actually doing with the original image.

I wasn’t learning anything, it was purely trial and error.

When I switched to Snapseed (because Hipstamatic is iOS only), I instantly appreciated that the settings are in a far more direct language.

Yes there are lo-fi options in the Vintage and Retrolux groups that are reminiscent of Hipstmatic. But even then, the parameters you can adjust are named logically, like Brightness, Saturation, Style Strength and Vignette Strength.

You can make an educated guess at what reducing or increasing these sliders is likely to do, so you know which to choose and which way to slide them. With Hipstamatic there wasn’t this opportunity for learning and understanding more.

For my b/w images I started with, yep, the b/w group of settings.

Essentially it converts to b/w by desaturating all the colour (though I’ve usually done this in camera already), then you can adjust three parameters – Brightness, Contrast and Grain. You can either start with one of the sub-presets – eg Contrast or Film, or just the Neutral one. Each of these has a starting point setting already applied on the Brightness, Contrast and Grain parameters.

I started with Contrast, as that’s what I mostly wanted to do, add contrast.

Then going into the three parameters, by default Brightness is 0, Contrast is +30, Grain is 0. I reduced the Contrast a little (you just slide your finger across the screen, left to reduce, right to increase), and took the Brightness down a touch too.

In the end, I’ve found because of the slight variation in how b/w photographs come out of different cameras, it’s been useful to have three b/w presets, offering differing graduation of a higher contrast, darker, blacker look.

They’re all around Contrast +25 and Brightness -5 give or take a few notches.

I don’t like to add “fake” film grain, so leave this at zero.

I prefer using the ISO of the camera to create a little noise/grain, which is why I usually shoot at ISO400 or 800 rather than native ISO. Except with the Olympus C4040, where there’s a little grain even at ISO100, so I use that. As we’ve talked about in the past, the older CCD sensors seem to give a much more organic and pleasing noise/grain. But that’s a different conversation!

Having these three b/w Styles, all higher contrast, but to varying degrees, means I rarely have to go back to scratch with processing photos. I just choose the one of the three Styles that looks best to my eyes.

So that’s it really.

If you haven’t used Snapseed yourself I would encourage you to try it.

For me it’s infinitely more logical, approachable and direct than LightRoom, in which I probably used about 2% of its overall features.

And the results for b/w are better than I used to get with LR after ages of fiddling about and not really knowing what was working.

And whilst I like Hipstamatic, if you want to understand what you’re adjusting and the impact it has on the final images, Snapseed is just so much more direct and obvious and logical.

I hope this has given you an insight into my simple workflow, and encouraged you to try something new.

What do you use to process your photographs? Is it working as well as you’d like, or are you open to other options?